Enter Andromedan Sad Girl. Wailing from the walls echo around the enclosed, windowless space as the pit patter of rain genuinely hits the rooftop some height above. I feel as though I am inside a tomb, encompassing both future and past as Florence Peake’s mud-wall paintings surround Tai Shani’s centre piece temple; the two artists come together in symbiotic concord. The cries and murmurs of Sad Girl swiftly transition into pleasure as I hasten to absorb the bulbous pappila mammaria that demands my attention, suspended from the ceiling and in my line of vision. 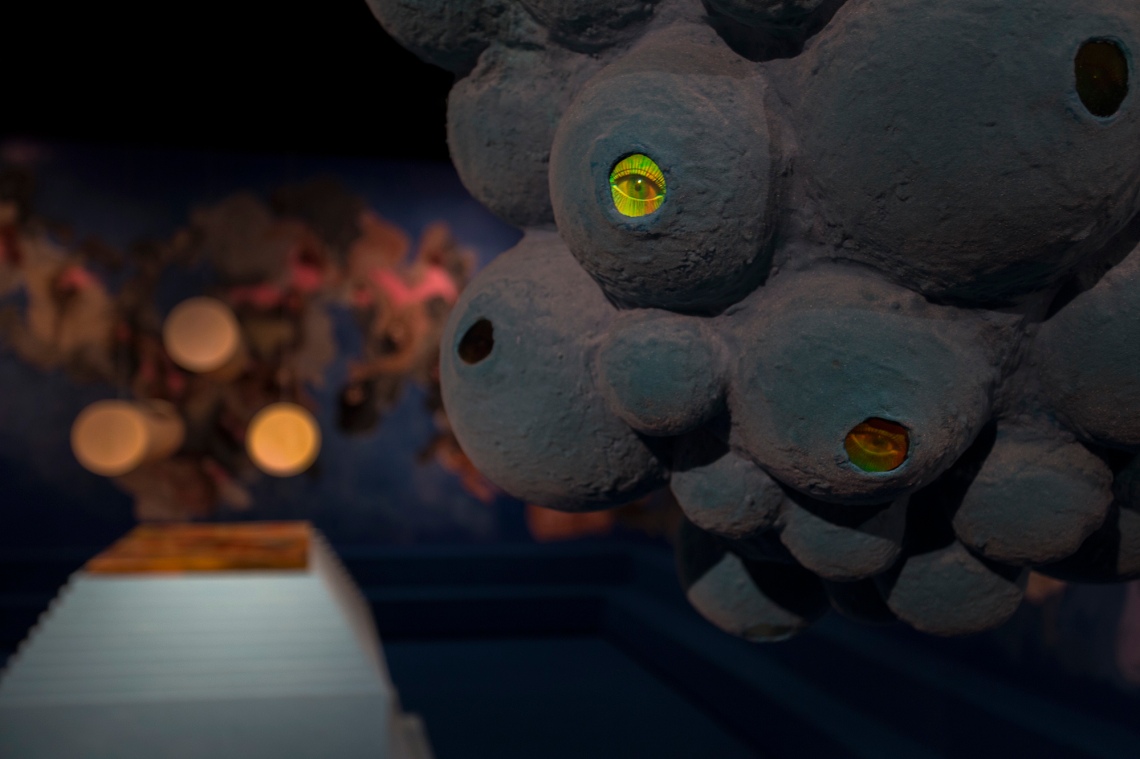 Both previous residents of Wysing Arts exemplary state of the art venue and development programme, Peake and Shani have established themselves as multidisciplinary artists, sharing a wealth of performance art experience between them.

Shani cited The Book of the City of Ladies, 1405 as a point of departure for her ongoing project ‘Dark Continent Productions’ whereby Christine de Pizan cherry picks historic female role models, from pagan to Christian saints, to comprise an allegorical city. Refuting Mathéolus’ Lamentations, three virtues instruct the female protagonist in building the construction against slander, to form a positive story of a idealistic post-patriarchal world. Is it any coincidence that Andromeda, based on a Greek myth, is a name taken from Latin meaning ‘ruler of men’? ‘Andromedan’ are also cited as the most benevolent advance species local to our galaxy as contactee Alex Collier has previously claimed. 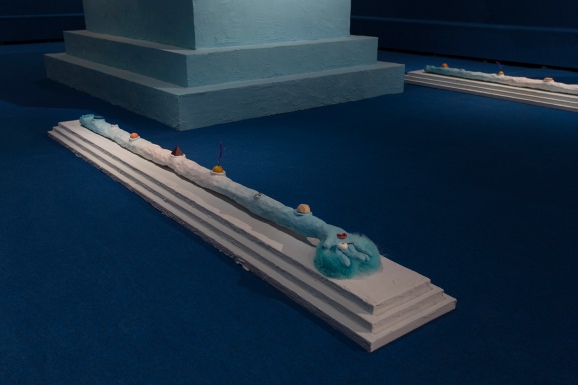 ‘In believing that objects and materials have their own autonomy and subjectivity, Peake draws on the expansive vocabulary of materials to enhance and contextualise her work.’ – Artists’ website

Peake’s parietal wall forms trace around the movement and form of the human body in a cascade across the space. A clay figurine emerges from the back corner, a fleshy reminder of the human as if clothed over with the suit of alien blue velvet. A careful choreographer, Peake shows her strength as an artist through her ability to forge a relationship between body and material. Similarly, Shani’s long limbs accommodating intricate objects in a egg cup manner bring together a concept of the body as having a display function. Amusingly, these objects have been told to be circulated between herself and other artists, making the work more ephemeral and challenging to be ‘consumed’ by the art collector. A sensual energy emits from this combination of surfaces, as its audience wonders around before taking a seat along the circumference. Under a watchful gaze of holographic eyes, you feel an underlying tone of dystopian seriousness as opposed to an overwhelming sense of maternal celebration.

Andromedan Sad Girl is on until 19th November.